Living in  rural poverty , something most of us never experienced, is exhausting. 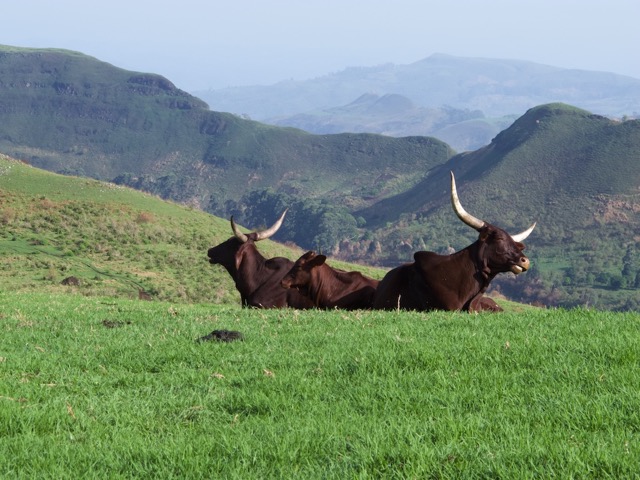 somewhere over the rainbow at Igim

Since most of the students in form 5 (3rd yr) at the high school failed the second term, I asked to interview several of the lowest performing in each class. Several had physical or emotional problems.   A young Muslim girl confided she had a toothache for over a year that interfered with her studying. She went to a local hospital, was given antibiotics and nothing further was done. She never complained to her parents again even though she had chronic pain.  Another teenager believed she was being visited at night by an evil spirit.  She began sobbing as she told me the story but the only support her mother gave was to tell her to pray to the Lord.  Parents don’t comfort their children, they command them.

But the problem for the majority of the children going to school here is the English language.  The majority only speak English at school and their tribal one at home so English is their second language.  But the schools don’t teach them English ..They teach in English. They barely can understand what they read in their textbooks or when their teacher is lecturing.  Their vocabulary is fifth grade level.  Added to this disadvantage  is the poverty syndrome .  Most of the students get up at 4 am, eat foufou (cooked corn flour and water) or cold rice or nothing, trek to school from as far away as 6 km, sometimes in the rain, many without umbrellas, and without lunch. Trekking home after 4pm for the upper grades, many have chores to do like fetching water, cooking or taking care of younger siblings. Some have no electricity so they either study by kerosene lamp (if they can afford to buy kerosene) or they don’t study. The seventh to ninth graders have 15 subjects, the tenth graders  9-11 subjects. How are these poor farmers children suppose to buy 12 text books that cost at least $10 each.  They cant and they don’t. Its all a conspiracy for failure.   ESL classes and an English dictionary for every student would solve the literacy problem but neither are available

To escape from the speeding motorcycles, pregnant women and snotty nose children, I decided to brave the climb up to Ijum, my girlfriends’s village, inaccessible by car on the top of a mountain.  I had made this journey five years ago and remembered the harrowing walk up and down the side of a cliff.  We now had an option to avoid the climb and take motorcycles on a rough dirt road that had recently been cleared.   We had two bikes, the girls on one and myself on the second bike.  They knew the boys who were driving, both Muslims from the village.  There was a decent road until we reached the cutoff and then we were on dirt paths.  Halfway up the mountain, the road turned to mud and rocks, so for the next 40 minutes we trekked on rough ground until we reached a plateau and found our drivers waiting with the bikes.  Finally the village, like a mirage in the desert, was sighted in the distance. We were greeted by their younger sister and brother and their father, who had arrived a  few hours before us.

My two Muslim friends, who were sisters, had grown up in this serene fairytale place with rolling green hills, big sky and puffs of white clouds. The cows and goats grazed freely on the huge expanse of land and the mama hen kept her little chicks following her everywhere.  Their compound, on the top of the hill, had several mud brick houses, immaculate inside but without electricity or water.  All the food was cooked in a separate mud house on firewood so everything tasted like smoke. So I chose to fast for 24 hours except for a few dry oranges and bottled water.  The main house had upholstered furniture, a lovely area rug and the walls were covered with pictures.  I asked how this heavy furniture was brought up the mountain since there was no access for a vehicle.  Villagers were hired to carry these huge solid wood stuffed chairs on their heads, I found this hard to imagine but truth is stranger than fiction.  On the return trip we decided to try the alternate route, across the green pastures and down the side of the cliff. The girls ran down in flip-flops, and I struggled in my hiking boots.  My eyes glued to the ground, I missed most of the beautiful scenery.

Back in the village, I was confronted with the screech of motorcycles , pregnant women everywhere, kids trekking in their dirty uniforms from school, women selling puff puffs, flour and yeast balls fried in red palm oil, communal taxis carrying 8 riders with baggage hanging from the trunk of the car, and little children playing in the dirt in broken flip flops.   If I sound weary, I am.

We can bring water to villages, grade dirt roads, provide trash cans to schools and villages, support poor students  in school with scholarships, and talk about family planning and HIV.  But we can’t change their ways of thinking,  traditions, habits and superstitions.

week 4: The Monotony of Poverty
Out of Africa