By lois pierris on August 16, 2018 in kyrgyzstan, Tajikistan

As we left the passport office and stepped out into the rain and mud, we were grabbed by several men and pushed into a beaten up Russian Lada. A young guy jumped into the front

and with a mix of Russian, English and our phones, we agreed on 6000 taxi fare($87) for the 350 km drive to Osh, the second largest city in Kyrgyzstan.

As he sped down a snow covered mountain pass in the rain and fog, we were mesmerized by the scenery, and stunned by his crazy driving. At the bottom of the pass, he stopped in the rural village of Sary Tosh to pick up a small package, and drove to another village where his family lived. Two young women came out to greet him and he moved us into another old Lada with better seats but a broken windshield. As we sped along the Pamir highway to Osh, we passed quaint farm villages,small herds of horses and cows and majestic mountains.

As we drove into Osh at sunset, the city reminded me of the Soviet towns in Poland and East Germany we visited after the fall of the Berlin Wall in 1990. Grey cement buildings, broken sidewalks, hole in the wall shops and restaurants, Osh was still showing its Soviet past. Without a decent government since independence in 1991, the country has been plagued by civil war, corruption and heroine trafficking from Afghanistan. A new government took over in 2010 and the tourism industry began to grow.

Most of the country is rural, and mountainous with high altitudes, so the majority of visitors come here for climbing, horse trekking or hiking May thru September. We came to experience the culture. The nine day trip we planned with a car and driver, began in Osh and ended in Duchambé, Tajikistan. The first day, driving south, we returned again to Sary Tosh and then spent the night in Sary Mogul, both small farming villages with only outdoor water wells. Unfortunately there is a coal mine that employs many of the villagers with poor working conditions. This is the beginning of the Pamir mountain range.

Our driver, Cubot,a Kyrg whose limited English together with my limited Russian,still had something to be desired, was following the Ramadan fasting. Getting up before sunrise to eat ,breaking his fast at sunset, and driving 3- 6 hours a day on bad roads, eventually affected his moods and attitude. We slept in a different village each night,the traditional home stays were our favorite, the rundown hotels without heat unbearable.

Mud brick houses without furniture, but with colorful carpets spread everywhere, we sat on pillows in front of a low table  to eat and slept on the floor on colorful mattresses and quilts in front of a primitive wood burning stove.  Both home stays had outdoor toilets, they were clean but inconvenient in the middle of the night. Breakfast and dinner, included, were a challenge. Since most of the villagers raised sheep, and yak ,their diet was meat and meat. My friends were vegan and I found the meat so gamy, i was unable to eat it. The bread was usually day old,(an Indian bicyclist we met broke his front tooth when he bit into it.)The  few vegetables available were tomatoes, cucumbers, and onions and often the food was served cold. There was always an abundance of either black or green tea.

The road to Karakul, the first village we reached after entering Tajikistan was rough, the village eerie, like the twilight zone. The houses were white, the huge clouds floating in the sky were white and barely anyone came out of their mud houses.This was the second and the best accommodation, home stay Sadat. The villagers were a bit hostile, some kids tried to throw stones at me for taking photos. A difficult life with little possibility of change, I guessed many of the people who lived here, were jealous of the  three families with home stays. They were earning $20-$50 a day while the average salary was $100 a month.

We slept in Murgab, our driver’s hometown, in a decrepit, 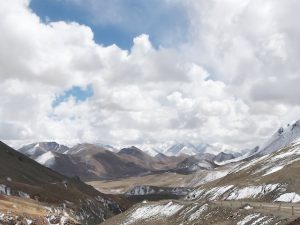 rundown hotel without heat and only 3 hours of electric at night. It felt like an old mining town, dusty, grey, poor with trucks passing everyday on their way to China to buy goods unavailable in Tajikistan and bring them back here to sell. The border crossing into Pakistan and Kyrygzstan from  China was an ordeal for everyone.

Happily leaving Murgab, we climbed over 12,000 ft into the high mountains on the Pamir Highway. I began to feel ill and by the time we arrived on the outskirts of Alichur, I was suffering from altitude sickness. We decided to continue on to  Bulunkul lake, another remote village.   Sparsely populated with old trucks and cars sitting outside people’s simple mud homes, we found our second traditional home stay. I slept most of the day, unable to eat, drinking only green tea. Nasea, headache, exhaustion and lack of apppetite, consumed me. Ironically the father of the family was the village doctor. He gave me a pepto bismo.

The Evil Empire
The Wakhan Valley and Afghanistan