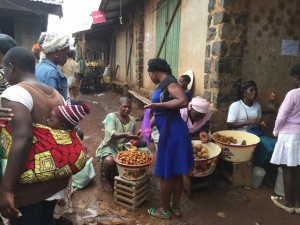 the village market after the rain

The rainy season has come early this year but it is probably preferable to being covered in dust.  When it rains here, it pours so loud that is it almost impossible to have a  conversation.  Making my bi-monthly trip for basic groceries into the big town of Bamenda 2 hours away, I enjoyed a Greek salad at the only European cafe without driving 7 hours to Douala. this is a hangout for all the Peace Corp volunteers as well..unluckily someone in the kitchen didnt wash the veggies very well and i spent 3 days with a stomach bug.

My neighbor, the mother of two toddlers, was sobbing hysterically when I returned to the house in the late afternoon. Her older sister, thirty three, had died after spending a month at the Catholic hospital in the next village. When I asked about her illness, no one in the family knew why she died.  Her symptoms, cough, fever, weight loss and diarrhea sounded like HIV but this is unmentionable.

Last weekend, the bodies of a female student at GBHS and her father, were discovered on the floor of their house,. A rumor they had taken a traditional medicine was assumed to be the cause of death. But after the contents of the bottle was tested, it was ruled out.  Just another unsolved  death. There are numerous funerals every week in town and nearby villages and most of the time the cause of death remains a mystery.

With so many people dying, someone I know is always going to a funeral; the mourning family cooks traditional casserole type food, guests bring either food, drinks or money and traditional dances are performed by locals dressed in colorful costumes.  The Irish call it a wake but here it is a burial and a social event. One never knows if the person who passed away was well liked or the crowds came for the food and drink.

Since I arrived in the village over two weeks ago, the power has been off every weekend for 48 hours. I keep a large supply of candles and matches waiting to light  up the darkness.  As I mentioned years ago, the electric utility was privatised sometime after 2000.  The first company who bought it was the American corporation AES.   The lights were out all the time since the grid needed major upgrading and maintenance.  There was no one to force AES to rebuild the system since Douala and Yaoundé, the business and embassy cities, were rarely affected and accounted for half of the users.  In 2014, AES either sold or gave their majority share to ENEO, a subsidiary of a British conglomerate.  The Cameroon government holds less than 45% share. Lights out all the time no matter who runs the utility.  From a population of 21million, 11 million have electric.

The other morning I turned on the kitchen sink but it was dry. A few hours later, when I tried again, a milky white liquid sputtered out of the tap.  Each month , the water is treated with huge amounts of chemicals, some say chlorine, others don’t know. I use bottled water, the tap water cleans my floors and clothes .The commercial water utility was privatised ten years ago, bought by a Moroccan company named Snake. They changed their name to Cam Water but I personally think Snake is more appropriate. The government never brought water lines to rural villages so most of the population depends on nonprofits to bring water to their communities.

Walking around the village the first few days back, I was overwhelmed by the number of young women with a young infant on their back.  In the west we have pets, here they have babies.  There are no baby carriers or strollers for the poor in this country; the mother has the weight on her back.  But once a child becomes a toddler, he is on his own. Either an older sibling, or the neighbour’s children watch over. I have never seen women in the village playing with their children but they yell at them all the time.  Men, as well, don’t hang out with their children. The father commands and delegates tasks for his kids and they do not refuse. Many are afraid of their parents and physical abuse is not uncommon. This explains why students in school don’t  speak up, mumbling and looking at their feet when they talk to adults. The strangest phenomenon is men with several wives who have birthed enough children to fill a classroom.  The Muslim community still follows this tradition but in northwest Cameroon this is common with the Kom people who are Christians. It’s a matter of honor to take several wives and tradition is still a very powerful force in Africa.

The lives of others on the African continent
Week 4    Frustration