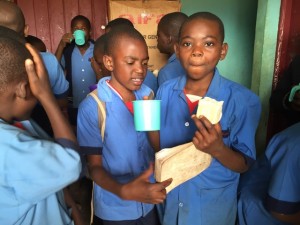 There is only one route from Douala to Bamenda and then on to the rural village of Fundong where I spend several weeks each year working on water and school projects.  Unfortunately, that road was in a state of demolition. There is a new bridge under construction and the road through Bonaberri, one of the city’s largest slums, is torn up. One lane is open in each direction but three lanes merge into it. Dodging trucks, rickety old buses, cars and communal taxis, my driver Massa escaped down a side street and we began the tedious seven hour drive on potholed roads, in  the sweaty heat. My bottled water was warm enough to use for a bath and my hair was coated in dust.  It is rare to find refrigeration outside of big cities in Cameroon.

Shocking but not surprising, each Francophone village we passed through was in a worse state of dilapidation than the previous year.  During colonial times, the French built wooden houses for the workers and when they left, the word maintenance left as well. Barely standing upright, without covered windows, they are a breeding ground for rodents and mosquitos.  As we drove through French speaking Cameroon, each village had their own crop so everyone on the road was selling the same produce in large quantities. It was like shopping at Costco; six pineapples, 3 kg of avocados, or a basket filled with ten papaya.  Since I had no refrigerator in Fundong, I passed on the bargains.   As usual, we were stopped twice by the police,  finding fault with the car permits to get a bit of cash. Using my years of experience getting out of unpleasant situations, after a chat about my work in Cameroon, a friendly pat on the arm and a big smile, we paid nothing.

Arriving in Bamenda at 3:30, I began the second leg of my journey, switching cars and drivers.  Massa lives in Douala, but to earn a profit of $40 after expenses, he  drove 7 hours to Bamenda. And he got to visit his brother. As we switched cars, moving my suitcases and my stash of groceries from the big city, we stuffed in a  new double mattress and a large propane tank; the only visibility was the side mirrors.  But with few cars on the road and an excellent driver, it was not a problem.

Reaching Fundong before sunset, my neighbor’s two sons greeted me with hugs and helped carry my bags down the rocky dirt path to the front door. The electric was on and the house I rent each year was clean enough.  A few hours later I was moved back in  and had a new mattress to sleep on, not the usual piece of soft foam.  Within 24 hours, the electric went off for 2 days.

Time seems to stand still in Cameroon, lives don’t often change for the better and unfortunately my neighbor Alex accidently had another baby. Her son was 14 months old when her daughter was born last July. She rents a small room next door for 5000 franc ($9), with an outdoor toilet and kitchen and now shares her bed with her sister and her two young children.  The total number of people sleeping in a room 10×10 ft is seven, their brother recently moved in . Her teaching career is over for the moment and she depends on her fiancée to send her money every month.

Vivian, who I have know since I came here in 2009, has lived in her mud brick house with the dirt floor since she was twelve, a fact I learned this year.. She is about 36 years old, dropped out of primary school and cannot read or write.   She has 4 children with 3 different fathers, none of whom have shown any interest in the children.

Then there are Clarice’s two children who are being cared for by her 78 year old grandmother who herself needs taking care of. The little boy is almost 3 and the baby is a year and a half. Clarice has gone back to high school  in another town.

The other night I found the boy standing half naked in the street, his clothes soiled. I grabbed his little hand and he clung to mine, as we walked down the street to my house. My neighbour bathed him and with children’s clothes I had brought from the States, we dressed him.  A few days later, his grandmother came over to thank me,agreeing that he wasn’t been  well cared for.

So many children with dirty faces, hungry bellies and no future.

Postscript….it all sounds dismal but the one thing that keeps me going here is how all of  you and I have helped make the lives of many people hear a bit easier.

So many villages have water taps now… we send  72 kids to school…we offer nourishment during morning break at the high school. And now we are bringing water to 2 primary schools, a teacher’s college and and a nursery school..and there are trash bins all over the town and in recycling in the high school..