The wind was blowing through my hair as I sat on the back of a motorcycle, my laptop wedged between  me and the young boy on the bike.  A quick, but dangerous way of  traveling short distances.  Most drivers are late teens to mid twenties; high school dropouts because they can’t pay the fees or buy books; elementary school dropouts because the system does not support the average student who needs extra help. Many can’t read or write even if they went to primary school for a few years. None of drivers wear helmets; they can’t afford them.  Some own their bike, others drive for the owner and earn a pittance.  The Christian boys are wild drivers, tough, unkempt; boys from the hood, many are HIV.   As I walk up to look for a bike, I scan faces, looking for Muslim drivers, coming from stable families. They are respectful, careful drivers and take baths daily, a definite plus as I am sitting behind them.  I spotted Omar, my driver from last year, who explained he had been up in the mountains moving cattle for his family.  He dropped me at the high school.

I had begun to interview some of the weakest performing students in grades 7-9.   Children are yelled out by parents and teachers all their lives , so they look down and mumble when responding to my questions.   Surrounded at one point by three 12 year old girls, they confided that a few of the teachers beat students with a gas hose on the palms of their hands, and call them stupid and lazy if they do poorly. But how can anyone learn in a class of 86 students with one teacher who stands at the blackboard asking questions, not answering them. Many of these kids have poor English vocabulary since they speak their tribal language Kom and Pigin, a bastardized English outside of school.    I have suggested remedial English classes after school or ESL classes. Instead the the government, who controls the curriculum for the entire country, has initiated 3 years of Kom, including, French speaking students and Muslims who speak Fulfulde…. To preserve the cultural heritage of  the Kom language.  This will probably increase the dropout rate. Too many children are going to school, a dangerous situation for the government. 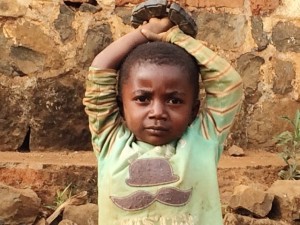 As I said everything in this country either stands still or moves backward. Today I had a bunch of high school seniors and university students who I knew as young teens, drop by to visit.  They had been by a few days earlier and I had been  extremely negative about life in the village.   When one of the seniors asked me if there were any positives for me in Fundong, I thought for a minute and said “the people I have met here”.

Whenever i have leftovers i share with my neighbors.  Remi  the boy I have been mentoring for years,came to try my Loukoumades. I asked him if there was anything to eat at home. He said no but told me he was used to going without food for 2 days at a time. His eyesight is failing him and he wonders what will become of him if he can’t finish school.  A doctor he consulted told him he should quit school to stop stressing out his eyes. I wonder what kind of training medical personal get here. 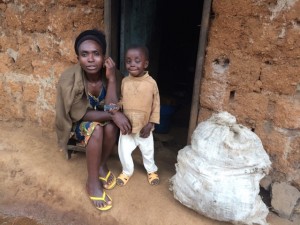 Last year after interviewing 60 struggling students, and discovered many did not have any food in the morning before coming to school , we began offering a glass of warm milk to anyone that was hungry. The program has grown but girls in the younger classes are the predominant group who come for the milk.  Boys are embarrassed or laughed at by classmates if they are seen taking milk so even if they are hungry, they will not come. The program costs about $60 a month.

Stigma is one of the reasons for the increase in HIV infected people in northwest Cameroon. There is always a funeral to go to. Harold and Maude would have been

Dead people are not tested for HIV.

Imagine growing up without any toys, games, dolls, bicycles or books. The  children just hang around playing with sticks and stones, covered in dirt. How does one keep clean, wash clothes, and cook food with a few gallons of water carried from the tap either near or not so near their house?   The struggle to survive goes on everyday.  Over the years, we have brought clean water taps to many schools and villages, put taps in the village market and pay fees for 40 children so they  can go to school.   But the living conditions and diet of most of these people has not improved over the seven years I have been coming here.  I wonder  how things would be here if I had never accidently answered an online adto help a small non profit.

my yearly visit
WEEK 3 FUNDONG –– the ants attacked the pineapple