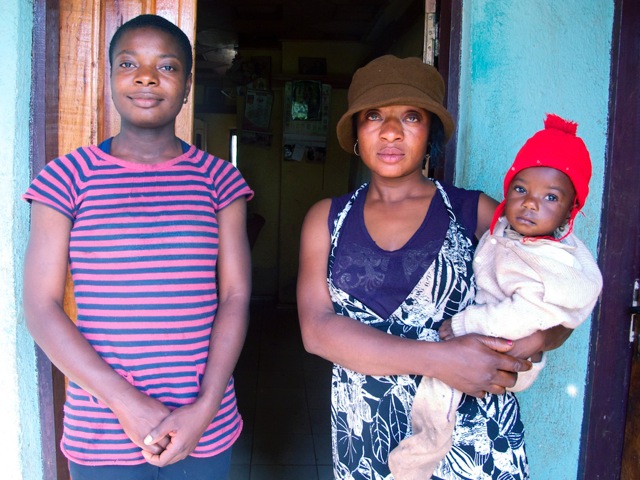 WHICH OF THESE WOMEN IS THE MOTHER OF THIS BABY?

THE 16 YR OLD…SEDUCED BY HER TEACHER AT 14….I THINK HE IS STILL TEACHING

NO NEED FOR IN VITRO HERE

So many women in the western world spend thousands of dollars on in vitro treatments or pay other women to carry their unborn child. Here in one of the poorest places in the world, young women are either pregnant or are carrying a baby on their back or both. And young children run around the dirt roads with or without shoes, carrying their even younger siblings on their back.

The other day I asked my neighbor how many brothers and sisters she had. She came out with the number 14, explaining her father, a subsistence farmer, has two wives. She said he, as many men in this culture believe, having many children, is a sign of power. As of today, 13 are still living, 9 still live in the family compound, the youngest is 5, the oldest is 40, none went beyond grade 6 and only one can read and write. Which proves that the women here are powerless to protect themselves, ignorance pervades, electricity is not available and sex is the only fun available.

The other day I met my new neighbor who is renting the single room on the side of my house. I am the only one in the compound with an indoor toilet and shower. I didn’t realize she was eight months pregnant, until she said she was on her way to the hospital for a checkup. I asked if the baby’s father was around and like so many women in these villages, she was on her own and had no choice but to have the child. She works as a primary school teacher, earning less than $40 a month and can expect nothing more until she is officially appointed by the government. Her sister who works at the local loan association in the village, has agreed to bring the baby to work when my neighbor returns to teach in September. Here, in Cameroon, as in most of Africa, the church and state, both extremely wealthy, seem to be in bed together. They make the rules and the masses of poor women continue to give birth to babies they don’t want and can’t support. Since abortion is considered a crime, and all the hospitals are religion based, even if a woman is raped she cannot get an abortion. There is one exception to all these laws which supersedes even the church; if you are rich you can buy anything, even an abortion.

One of the young girls I befriended several years ago, turned up pregnant at 16 when I arrived in February 2012. Again a disappearing boyfriend, a mother who earned 40,000cfa ($80) monthly, a younger brother, all living in 1.5 rooms mud brick cottage. Pregnant girls cannot remain in school so she sat out six months, had the boy child and returned to school in September. Her tuition was paid by the joint venture of Shared World Visions and BFF in Fundong. She is going to graduate this June and confided to me that she wants to go to university. Afraid to ask her mother and grandmother to care for the child, she is waiting until she gets accepted at a college.

Since we began our pseudo guidance counseling program at the high school, we have learned so much about each child. Almost every student we interviewed is one of five, six or seven siblings. Many of them come to school hungry, some can’t read the blackboard and need glasses but cant afford them. Many of them speak Kom, Fufude or Pigin at home so English is a foreign language. But everything is taught in English. None of the 55 teachers give this problem much attention. Today we interviewed a tiny little boy who was fourteen and had been living with HIV since he was born. He was failing because he was in and out of the hospital. But all that his teacher noted was he was a poor student.

Two Peace Corp women living in the village have been helping to interview students who have failing grades . We will try to set up a program to teach classes after school in English language and math after I leave. For all the kids who come to school hungry, when they arrive at 7 am, we are serving a glass of warm milk (powdered; there is no fresh milk here). Shared world Visions is funding the milk program or else it will not happen. Today we were given seven seventh grade students who were failing most of their classes. Originally they were told the class would be thirty minutes but after an hour they were still raising their hands and asking questions. We were supportive and friendly, a contrast to the behavior of the teachers at the school. And the class was not the usual sixty students.

Without light
School is No Fun