The subway in Beijing is modern, monochromatic and hospital clean. The policing at each station mirrors U.S. airport x-ray machines and security . Electronic subway maps on the ticket machines with a choice of languages almost make it possible to buy a ticket. Enter your departure and destination stations, use Yuan paper money and there is a good chance a ticket will drop down.Eventually we learned.
Its almost impossible to ask for directions unless you speak Chinese. I just learned four words; yes,no,thank you and I’m looking.That might be the extent of learning Chinese.
The modern city of Beijing has a population of 23 million,and we definitely did not want to be part of that number, so we chose to stay in one of the Hutong neighborhoods, which date back hundreds of years. Very similar to the medinas in North Africa with narrow stone streets leading into dark alleys, hole in the wall food shops,and pedestrians dodging motor bikes, vans and cars, our hotel, Shichahai Shadow Art Performance, blended in with the tiny grey cement one story dwellings. That was the only similarity, grey cement. The facade, modern and minimilistic, was glass, stainless and concrete, the interior an elegant Chinese theatre. Besides a wonderful ambiance, the tiny restaurant served gourmet food. The reason the hotel was located in this working class area was to bring travelers to the old Beijing and reintroduce shadow art puppeterring.
Exploring Beijing, the first day we walked the old neighborhoods,and the parks that were filled with Chinese tourists since it was still the May 1 holiday. Our second day we took the subway to the north train station to register with our passports and pick up our tickets for X’ian, our next destination. Back on the subway, our visit to see the pandas at the Beijing zoo turned out to be a very sad experience. There was no doubt these animals were depressed, locked in a small make believe jungle,as hoards of adults and children oogled and shouted at them. I have never been a big fan of zoos but this last time definitely sealed the deal. Our last excursion was on several river boats up to the Summer Palace, 540 acres of Chinese landscaping and design, a World Heritage site since 1998 .Finally two hours and three boats later we arrived, a challenge since we rarely found anyone who spoke anything but Chinese. The abundance of parks in Beijing have made it possible for people to keep their sanity in the chaos and colorless landscape. 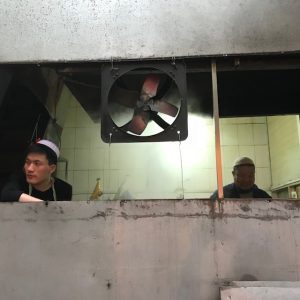 Our night sleeper to the city of X’ian lasted 12 hours, landing us in town at 8 am. Too early to check into our airbnb, I convinced my friends to have breakfast at one of the big tourist hotels near the station. Having a hard time with the cuisine in China, I was smittened with the huge gourmet buffet. . Renting an airbnb apartment in the old Uighur area in X’ian, in the evening we were carried along by the throng of bodies down a maze of narrow, neon lighted streets in the Uyghur area of town. The energy in the streets was addictive and thrilling, unlike typical Chinese culture.
Most tourists come to X’ian to see the Terra Cotta Warriors at the big amusement park an hour from the city. Hundreds of people, Asians and foreigners, make their way on tour buses to these recently unearthed tombs (1976) and pay the equivalent of $20 to enter the site. English speaking guides pursued us without success. Before reaching the ruins,we walked for 30 minutes, past every kind of shop imaginable including one selling real fur skins, the other gelato.. We didn’t buy any furs but succumbed to the gelato,shocked when each serving was $10 for 2 scoops. The warrior site astounds most people but I was more enthralled with the night bazaar in the old Uyghur neighborhood. Eating street food cooked in front of us, my traveling companions tried every obscure type of vegetable and bread available here.. I stuck with squash, tofu and yogurt. The breads are dry,hard and without salt. I was saved from starvation by the abundance of fresh fruit stands in the old town. Take a large plastic bowl, choose the fruit you want, have it weighed and then cut up ready to devour. 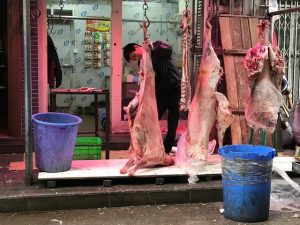 The city of X’ian in Xinjiang province, originally called Xinjiang Uyghur Autonomous region,is the beginning of the old Silk Road which crossed through Western China to the city of Kashgar close to the borders of Tajikistan and Kyrgyzstan. There has been civil unrest here as China is trying to destroy the Uyghur culture, knocking down their old neighborhoods, building modern cities and bringing in Han Chinese to settle. The Uighur language has a Turkic base, and a melodious sound, unlike high pitched harsh Chinese.
After several days in X’ian, we flew to Urumqi ,a huge business metropolis, which we avoided, escaping immediately to the train station heading to Turpan. Delayed planes and over booked high speed trains left us no choice but to take the local train in second class. We were the only non Uyghurs on the train,creating a flurry of excitement.. This culture is so friendly and boisterous in contrast to the Han Chinese. The women wear bright head scarves and colorful clothes, the men black suits.
The train dropped us at 8:30 pm, in Daheyan, a forgotten town 54 km from Turpan. Stepping off the train without a jacket, fighting a wind chill factor that felt like below freezing, I sacraficed shooting some amazing pictures. As usual there was a police contingent waiting for us before we could exit the station. It was obvious that few foreigners every stopped at this station as the police seemed amused and curious. Jan, one of my travel mates,was able to communicate that we needed a taxi to go to Turpan. The station was at the bottom of a hill, so I struggled against the wind to get to the taxi area. The inside of the car was decorated like an old Bedouin tent. Our driver spoke only the Uyghur language so when he lit up a cigarette we started coughing to get our point across. There was an amazing sunset but the window switch was broken and when I tried to open the car door, the wind was so ferocious, it was either a photo or my right leg. 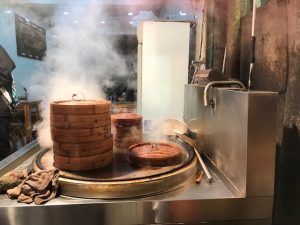 As we bumped along on dirt roads, Jan,using Google maps, decided to call the hostel in Turpan to get the driver directions. We decidedly our driver was a relative of the policeman who called him, definitely not an official taxi since he first drove in the wrong direction and then avoided the freeway until we stopped for gas. Suddenly outside the gas station, the police made us get of the car before the train like barriers were lifted. We stood in the bitter.cold wind,while the police hid in their tiny station. We watched as our driver drove across the huge station,filled his tank and exited on the far side. Was he coming back since I had left my bag with my money and passport in the back seat. Suddenly we heard a loud horn on the street and saw the car 200 ft away. We learned after that only the driver can enter a gas station. Getting back in the smoke filled taxi,our Uyghur guy had just lit up a cigarette and was puffing away with the window open.
This was the longest 50 km or 30 miles any of us had ever experienced.As we drove into Turpan the buildings were lit up like the Las Vegas strip,including neon lights on the sides of apartment buildings. I immediately knew this had been converted to a town for tourists.
We had all agreed to stay at the hostel recommended in the Lonely Planet, the best choice in town. After our elegant hotel in Beijing, communal toilets and showers took awhile for me to digest.
But like most things in life,we adapt.And the morning espresso was delicious.