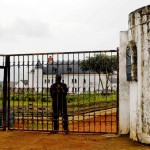 Once upon a time in an African country, there was a lord who lived in a white castle on the top of a mountain. He was the child of two religions, Christian and Muslim, his mother was a Kom princess and his Fulani father, was a small land owner. Our lord was a self made man and owned thousands of acres of fertile soil in wooded forests and rolling green hills. Part of his huge estate was a tea plantation. He had a tea factory on his estate that processed and packaged all the tea that was grown there. He had over three hundred horses, hundreds of cows and other barnyard animals. He had a penchant for collecting unusual birds. There was a peacock house full of bright green, blue and golden birds that were imported from the far away land of Australia. The long necked strange looking ostriches came from France at a very high price. He grazed his cattle on farmland belonging to neighboring villages without permission. There were thousands of poor farmers who worked on his tea plantation. He built them shacks to live in without running water or toilets. They paid rent for their dwellings but were given free medical care at the clinic. His photograph hung in the entrance to the tea factory, a man to be feared and obeyed. He respected only what he wanted and did not respect the property of other nearby villages. If he saw the farmers cutting down their own trees, he sent his guards to take all the wood away.
When this man was born, his father owned a small piece of land and a business in a small village two hours away. He was not a rich man so his son had to make his own fortune. The secret to the son’s success and fortune was his cunning and selfishness. He began his climb to great wealth when he was in charge of the king’s transportation services. He was shrewd and secretive and when the old king died, he was left a large sum of money. With this inheritance he began his building his empire and amassed a fortune. Politically aware as well, he became the confidant and friend of the new king. He took five wives who gave him sixteen children. Some of the wives lived in a European country and some in the capitol of his own country.. Much of his money was sent out of his country to foreign banks, as most of the very rich men did in his country. As his fortune continued to grow, he did not increase the salaries of his workers but treated them as serfs as in medieval times. He hired his own little army to give him unlimited power and became one of the richest men in his country. He gave nothing to the poor or to help his country improve their health and welfare. He still lives in his white castle as a lord on his manor with over 2500 poor workers slaving for him.

P.S………… unfortunately this is a true story not a fairy tale